Many molecular species such as genes, RNAs, and proteins that make up intracellular reaction networks are present in low copy numbers inside a cell, which introduces relatively large fluctuations in the reaction rates. Such “noise” in cellular reactions can have important consequences, in that individual cells make independent decisions on which response to mount, if any. Probabilistic cellular decision making can lead to heterogeneous populations 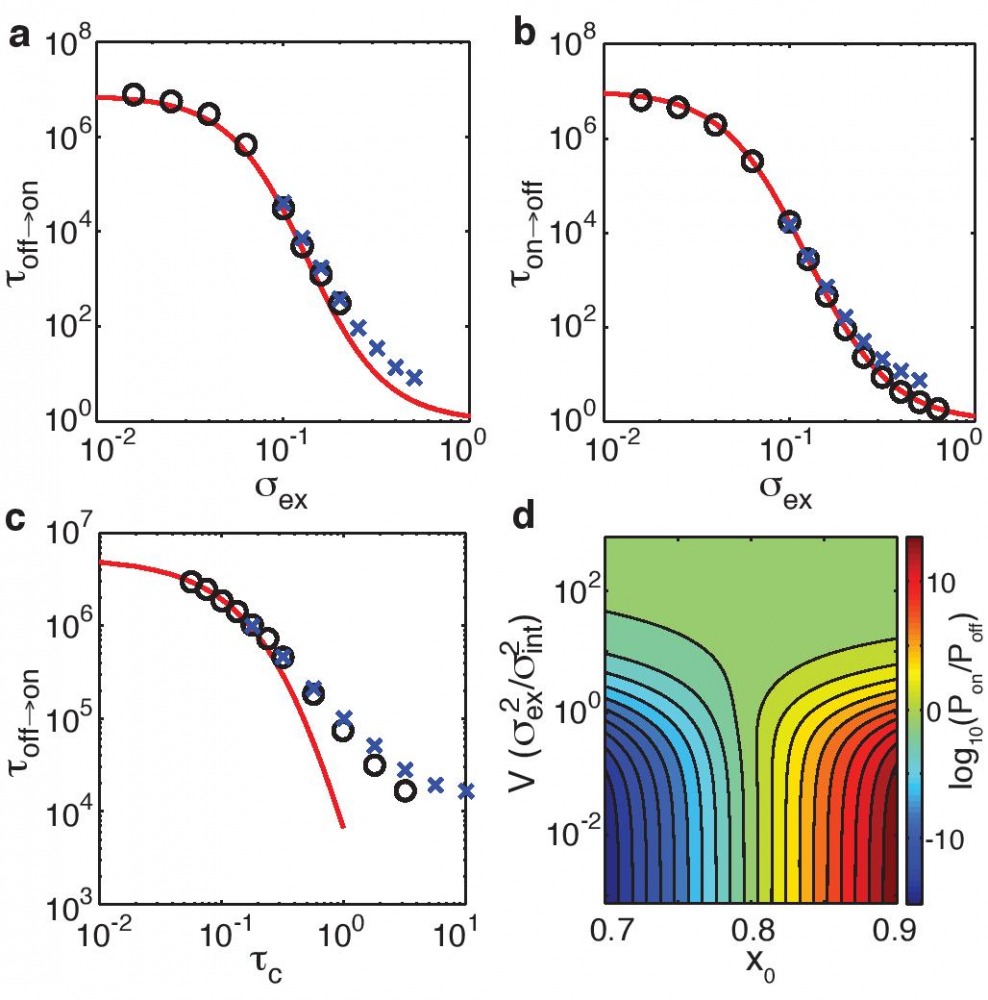 that display multiple stable and heritable phenotypes, even when the cells are isogenic and in identical environments.

Feedback-based genetic switches regulate diverse decision making processes such as microbial environmental adaptation, developmental pathways, nutrient homeostasis, and bacteriophage lysogeny. In recent years, there have been numerous theoretical studies on genetic switches driven by intrinsic (or demographic) noise, noise arising from within a closed system of interest. Yet, especially for high-copy-number biomolecules, extrinsic or environmental noise, which gives rise to time-fluctuating reaction rates, may be much more significant, likely governing the overall dynamics.

Our research is dedicated to developing a concise theoretical framework to describe the combined effect of intrinsic and extrinsic noise on the stochastic dynamics of genetic circuits. In particular, we study how extrinsic noise affects escape times from (meta)stable decision states and the overall escape mechanism, in genetic switches.  Our main goal is to achieve understanding on the implications of life in a noisy environment on microbial evolution. We investigate this question by exploring how various network motifs that affect the stability of decisions, may evolve to maximize the microbial population fitness in varying environments. The outcome of this research should increase our understanding on how biochemical networks have evolved to both control and exploit their underlying fluctuating environment.

Systems containing a large, yet finite, population of interacting individuals or dynamical units often experience fluctuations due to the stochastic nature of agent interactions and local dynamics. Most of the time, such systems dwell in the vicinity of some attractor – a stable equilibrium state of the system – undergoing small random excursions around it, while large fluctuations, on the order of the typical system size, are rare. Yet, it is precisely these extreme, rare events, giving rise, e.g., to population extinction, switching in gene regulatory networks, the arrival of biomolecules at small cellular receptors, power-grid destabilization, self-assembly of macromolecules, or the loss of biodiversity, which may be of key practical importance.

Usually, rare events in populations are considered within well-mixed or homogeneous settings, e.g., where individuals interact with an equal number of neighbors. In this case, analytical treatment is possible using standard techniques. On the other hand, it is known that in topologically heterogeneous networks, e.g., where nodes have variable degree, the critical behavior can be dramatically affected. Despite of the great interest and relevance in predicting rare and extreme events in degree-heterogenous networks, and in particular, understanding the role of network topology in facilitating such events, this task is notoriously hard due to high dimensionality and complex coupling between degrees of freedom. Though some progress has been made by applying semi-classical approximations to master equations governing stochastic dynamics in complex systems, often, the resulting Hamilton equations are difficult to solve, as they require computing unstable trajectories in high-dimensional phase spaces. Consequently, analyzing rare events in general networks has been mainly limited to near-bifurcation regimes, where the dimensionality of the system is drastically reduced.

Our research is dedicated to studying how the complex network topology influences long-time behavior of interacting populations residing on such heterogeneous networks. We use state-of-the-art techniques from statistical physics and probability theory to study the effect of the n

ontrivial spatial setting on both the typical behavior, as well as on large deviations from it. Here we investigate both static and time-varying random networks. For static networks, the connectivity matrix as well as the reaction rates, are constant, and we consider two scenarios: (i) local interactions between nearest neighbors only, and (ii) long-range interactions which decay with the distance between nodes. In the case of  time-varying networks, we consider networks with a time-fluctuating reaction rates and/or connectivity matrix. This scenario entails e.g. the possibility of edge rewiring in response to a neighboring node getting infected. In addition to random networks, we also study how the assortativity degree of a network, which measures the degree correlation between neighboring nodes, affects long-term behavior.